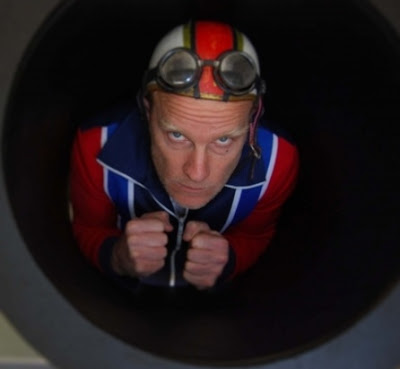 A painfully funny theatre show, Memoirs of a Human Cannonball sees 'The Singing Stuntman' (circus performer Matt Wilson) joined by Shirley Billings as popcorn seller P.K. ("as in the chewy) in an autobiographical production about the horrific accident that put an end to Wilson's cannonballing career. Through a skillful combination of clowning, comedy, songs, slides and home movies, the show explores Wilson's childhood desire to jump off things, and how he channelled that energy into a highly successful circus career. Along the way we're introduced to the Zacchinis (the famous circus family credited with establishing the human cannonball act) through some deft, daft cod-history; and entertained by some charming tunes and melodious harmonies in such songs as 'Hot Buttery Popcorn' and 'It's No Accident'.

The show culminates in Wilson's description of his accident, which had audience members wincing and groaning in sympathy, but takes a playful route to the unveiling of the gruesome details, while also generating surprising tension along the way. Billings seemed a trifle nervous on opening night, resulting in a slightly strained first few minutes, but once Wilson - whose stage presence and charisma are considerable - joined her, the show quickly found its groove.

There's a gentle, goofy charm, and a playful faux-naivety to Memoirs of a Human Cannonball which audiences should respond well to. Don't expect constant belly laughs; this is theatre, not stand-up; but do go and see this clever, confronting and engaging production.

Posted by richardwatts at 12:28 pm